Haven’t had time to get out for a hunt this year? Or maybe you missed that once in a lifetime shot cause you didn’t put in the time at the range. Well, bowfishing can be a great way to hone your skills and get out for a hunt when the seasons are closed.

We’ve put together a list of the 5 best bowfishing reels of 2019, so crack a beer and get into some light reading.

Like usual, lets start with a little education for those new to the bowfishing game.

What you need to know before choosing a bowfishing reel

Believe it or not, while bowfishing may not seem as big as what normal bow hunting is, it’s certainly still a sub niche that has a lot of mad keen enthusiasts. Along with that type of support and following comes a large array of products. That means to put you on the right path your going to have to have a base understanding of the different types of reels and setups to get you going.

In the bowfishing game you’ll usually come across three main styles of reels in the market. Each one of these styles have unique ups and down to them, and depending on what you want to fish for, one type may suit you better then others.

The Drum Reel is probably the most common when it comes to beginners starting out on their bow fishing journey. The design is extremely simplistic and it’s affordability is second to none. Using a drum reel is extremely similar to using a hand line in the fact that you are manually required to reel the line in upon retrieval. Once the line is wrapped around the drum the last bit of line is pulled underneath a line holder, similar to that of nocking an arrow. The line holder holds the line in place, and when you release your arrow the line will be forced out of the line holder. You then retrieve it and start all over again.

As I said earlier, these are the most common type of bow reel, and the earliest design as well. There extremely simple and lend themselves well to beginner bow fishers.

If you’ve done any fishing then you’ll know exactly what a spincast reel is. Their a great little reel and generally user friendly compared to their brothers, the baitcaster. So, does this simplicity transfer into the bowfishing game?

Well yes and no.

Personally I believe the spincast reel is stepping it up a notch from the drum reel and better suited to those getting a little more serious with their fishing game. The problem with bow spincast reels is they have been known to be less durable.

That being said, they also have a lot of great upsides. The most notable ones being that they are set with the same line that you use on your fishing rod. This is great because it means depending on what fish your hunting, you may need to up your line break weight.

Another pro with the spincast reels is they have a drag just like a normal reel. If you get off a shot off into something decent then you can just up your drag and hold on for dear life.

When it comes to retrieval things couldn’t be more simple or exhilarating. Just like a normal reel you have a retrieval handle and you reel that bad boy in until you’ve landed.

Personally I believe it’s features like this that make a spincast reel much more like sports fishing, and for that reason, the design gets a thumbs up from me, but it keep it in the back of your mind that their are more things to go wrong with it as opposed to it’s counterpart the simple drum reel.

The retrieval reel is by far the most modern and most durable on the market. But it comes with a price tag that demands that type of quality be payed for.

Now personally I believe that unless your super serious and a big game fish hunter, then theirs really no need for a bow fishing reel like this. Save yourself a couple of dollars and opt for the for a spin or drum reel.

On the other hand, if your a crazy mad man and want to bow fish for things like ‘gator, then this is the reel for you.

This style of reel carries a heavy bow line, of which you would expect if your planning on bowfishing for the big stuff. Definatley overkill if your shooting small game fish.

The design of this style of reel is such that the line doesn’t wrap around like that on a drum or spin reel but instead is stored freely in a bottle like device. This is great for to help with issues of tangling in the air, but the heavy line does slow the arrow down somewhat, but not really enough to make a huge difference.

The other downside to this style of reel is the hefty price tag, but as said, if your going to be hunting gator with a bow, then you’d want to make sure your paying for the best quality stuff money can buy.

As with any of your hunting or fishing gear, you should aim to buy gear that’s going to stand up to the tasks that your going to throw at it.

Trust me, you wouldn’t want to try fish for gator with a drum reel. On the other hand fishing for gar with a retriever reel would be overkill and take away the fun.

When looking for durability I believe that the drum reel would take the cake.

Their are much less things to go wrong with a drum reel then it’s counterparts and generally speaking the line that comes standard on drum reels will take a pretty good hiding.

At the end of the day however, durability is usually much less about quality and more about maintenance. Most times gear will break due to lack of maintenance before it ever wares out.

Now, when it comes to ease of use you can’t look passed the drum reel once again. As I’ve already stated, the simplicity of design makes this style of reel perfect for the beginner bow fisher, but it does have it’s limitations.

As you step up into retrievers and spin reels usually these styles of reels come with a higher level of experience required, and while they are great and definatley have their spot in the bowfishing game, they take a little more practice and getting used to.

The simplistic and reliable design of the aluminum drum reel setup makes this bowfishing reel one of the top sellers on the market for beginners. No fancy bells and whistles to get caught up in with this bad boy, just an easy and highly effective drum reel.

The Sting-A-Ree spits out a super light fiberglass arrow making speed and penetration an easy feet for the setup to reach.

The reel utelises 50ft of 80lb line giving you every chance of not loosing that monster fish.

One of the other pro’s to this reel setup is the main construction is all made from aluminum, meaning if your a little sloppy on maintenance then this reel will tend to be a little more forgiving. Especially if you plan to hunt the salt water.

All in all the reel is a cheap, simple yet highly effective setup, and is a great beginner bow fishing reel. 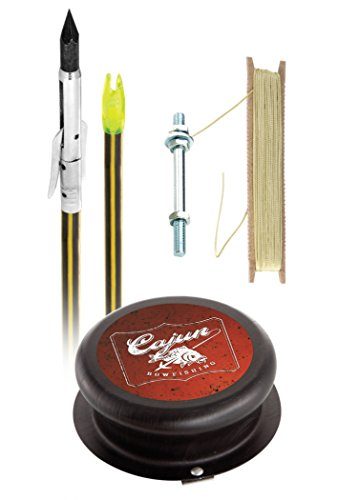 If your keen on stepping up your bowfishing a notch, then this is the reel for you. AMS’s tournament retriever pro is at the top of it’s game. A much more sophisticated setup, and something for those that are a little more serious about hunting fish, rather then fishing for them.

The unique design of the retriever pro is such that it provides the ability to have great speed and penetration, while having much less of a chance of having tangles. The bottle style line storage container is able to provide this due to it’s ability to have line shooting out freely rather then spooling off a reel.

This is also the reason why tangles are much less common with style of setup, providing a much greater experience.

Quality comes at a cost though, coming in at a touch under $130.

So what will that money get you overall?

Well, for starters you’ll have an extremely durable reel, with a fast gear ratio which helps to get those trophy fish back to the boat as quick as possible. A reel that shoots as well as it looks, and can handle almost anything thrown at it.

All in all, great reel, but quality comes at a fair price. 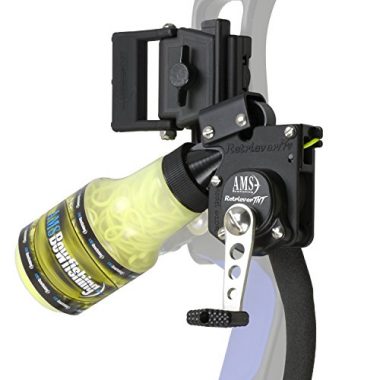 Personally I don’t like this style of reel, but hey, we’re here to review bowfishing reels and that’s what we’re doing.

Let’s start with the upsides.

The reel comes in at a nice cheap price, so if your on a shoestring budget then this may be an option, however I would personally opt for the Cajun Stin-A-Ree II for the few extra dollars.

The other upside is the use of stainless steel, making this little reel a great option for those not so great with their maintenance.

Now to the downsides.

These style of reels can end up being more hassle then their worth. Tangle ups are an all to well known mishap with these bad boys, and being in an enclosed style reel doesn’t do any justice when trying to untangle them.

Think of these as the bait casters of the bowfishing world, they can be great when you’ve practiced with them for a long time, but their not the most beginner friendly style bow reel to use.

Now I’ve ran them down enough I should finish on a high, so one last thing I think these reels do have going for them. Their aesthetically pleasing. That’s probably the best thing about them. They’re very neat and tidy and keep all line hidden away.

So if your more about looks then functionality, then go right ahead. Each to their own. 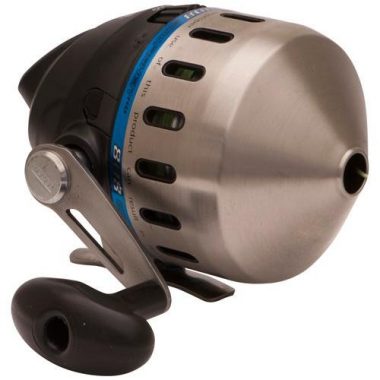 So their you have it, a quick down on dirty of some of the bow reels on the market at current. Their are many more on the market but ultimately it comes down to personal choice. Only you can decide and you’ll get the experience of what will best suit you by talking with other bow fishers. Most hunters and fishers are more then keen to get people into their sport so don’t be afraid to ask if maybe you could have a shot of their setup. 9 times out of 10 you’ll find the answer will be a “go for it”.

Till next time Bow fishers,